Babybot Wall Decal Art… for the Young at Heart!

Lately at Urbanities we’ve been going back in time…To that period in life that was full of games, tantrums, playgrounds, friends and most importantly fun and imagination!

Babybot wall stickers (which we’ve recently put up on Urbanities.com.au and Urbanities.co.nz) just like childhood are brimming with fun and fantasy. Not only that, but each and every decal has a sprinkling of uniqueness and a dab of quirkiness that we can’t help but love. 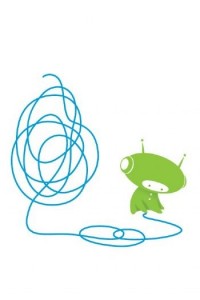 Where to Use the Babybot Graphic Decals?

Babybot wall stickers are perfect for a range of locations…Children’s bedrooms, play areas, a newborn’s nursery. The Babybot decals are also great for adding some colour and imagination to preschools, doctor’s surgeries – to be quite honest any place where there are children!

Just between you and me we also believe that the Babybot decals are perfect for any area, in the home or at work, that lacks colour. These wall stickers are playful and we think that everyone can enjoy them….for example, how about using the Babybot Doodle Decal in a Cafe or Artshop or the Babybot Build-a-bot Graphic Wall Sticker in a gadget shop or the video room at home?

How to Apply the Blik Wall Decals?

These wall decals are designed by Babybot and made by Blik. Blik graphic wall art is one of the best and most high-quality wall sticker companies in the World…their wall stickers last a long time, are easy to apply and te materials used are high-quality (this is great for people that love to shop for the better things in life!).

Wall stickers are child’s play really… Just clean the surface on which you want to stick them,then hold two corners of the transfer tape (with decal, of course) and stick to your desired surface. Smooth one edge onto the surface first, to avoid wrinkles and bubbling, and continue firmly smoothing out the tape all the way down. Now that you’ve applied your graphic, it’s time to remove the tape. Start at one corner and slowly roll it along your surface. If any part of the decal sticks to the tape, simply stop pulling, roll back a bit and repress graphic onto the surface and continue peeling away, slowly.

Now that you’ve got the hang of it, take a look  at the four new Babybot wall stickers that we’re pretty excited about.

There’s the Babybot Dangly Carrot Wall Sticker which is full of quirky but very cute rabbits. 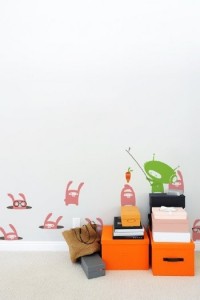 This Babybot decal, like the rest featured here, was designed in collaboration with Blik and is comprised of 13 wall stickers. The rabbits vary in size and included in the set are two pairs of glasses for the nerdy rabbits to wear.

Just as cute is the Babybot Doodle Sticker with the characters BabyBot and Beaverbot busy entertaining children with their wall doodles. Hopefully your children will be so enthralled by Babybot’s doodles they won’t draw on the walls! 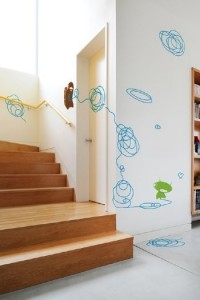 Add some creativity and fun to any child friendly areas with the 14 decals available in the Babybot Doodle pack.

If your children is in love with all sorts of quirky creatures and dinosaurs then the Babybot Land Wall Sticker was made with exactly them in mind. Full of interesting creatures and animals this Babybot wall decal will get your child’s imagination going. 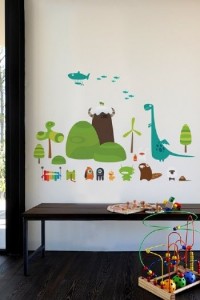 Bring to life a whole new world in your child’s bedroom with the 29 wall stickers and introduce your children to the whole Babybot gang!

Last of all keep your children very busy with the 127 piece Babybot Build-a-Bot Re-Stik! This fabulous wall sticker encourages kids’ creativity and imagination by allowing them to create their own Babybot Robots…and best of all since this decal is a Re-Stik (Re-stik is a special Blik feature) where you can remove the stickers and stick them on the wall again to create new robots and designs! 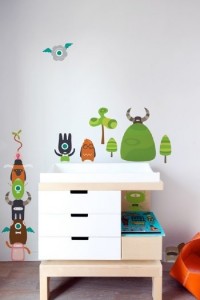 Get sticking today with these very cute Babybot Wall Stickers!

Canadian Babybot is more than just a modern baby store – it’s an attitude. If people love beautiful, relevant and design-inspired products, why should baby products be any different?

Their awesome product selection includes everything from strollers and toys to sippy cups and, of course, Blik wall decals!

You can find the Babybot Wall Decals andmany other wall decals at either:

Quirky Guts and Glands T-shirts by I Heart Guts